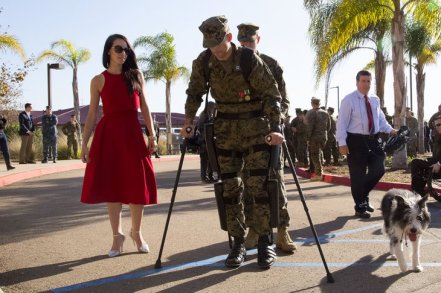 This week my nephew Capt. Derek Herrera retired from active duty with the Marines. He was awarded a Bronze Star for combat valor at his retirement ceremony at Camp Pendleton. He was accompanied by his wife Maura and service dog Shaggy. And he was walking even with a bullet lodged in his spine, thanks to the recently FDA-approved ReWalk robotic exoskeleton.

Derek was wounded in Afghanistan in 2012 by a sniper’s bullet in the Helmand River Valley of southwestern Afghanistan leading his special operations team, paralyzed from the chest down.

Today Derek is CEO of Ruckpack. RuckPack® is a concentrated liquid energy shot of essential vitamins and minerals, without caffeine. He is also completing his MBA from UCLA.